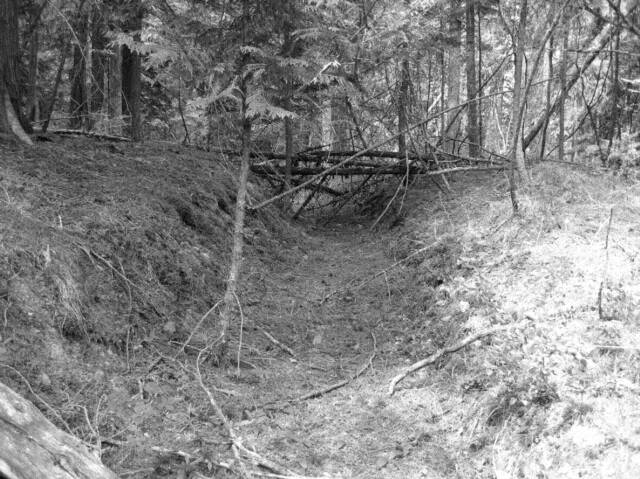 The Richlands Historic Flume Trail Society was founded in 2007 as a non-profit organization whose primary objective is to preserve the Richlands Irrigation System and turn it into a hiking trail (no motorised vehicles) for public use.

The idea for the trail began in 2005 when members of the Myers family, whose ancestors were pioneers of Richlands, learned about the Richlands Land & Irrigation Co. through historical newspaper articles and began to investigate the system’s history at local museums. This was followed by a number of days hiking through the area locating the original system line. Support for the plan was especially received from Cherry Ridge Management. It was not until late 2008 when other members of the community began to take an interest in the trail and volunteered their time and equipment to restore the trail to enable easy hiking through the area.

History of the Richlands Irrigation System
The Richlands Irrigation System was the development of the Richlands Land & Irrigation Co. It was an intricate system of ditches, flumes and trestles that lead from Heckman Creek along the mountainside above the valley before being gravity fed to the Richlands Valley below for the homes, animals, orchards and crops. It was proposed to make Richlands a fruit producing area. Settlers from England and the United States came to settle with dreams of making their fortune in the valley.
Construction on the irrigation ditches on the Richlands Flats began in 1910, with Frank Eurit as foreman. The construction of the flume itself started in April of 1911. Work proceeded on these ditches for a few years and in 1913 it was reported that pipe was being laid. In February of 1914, 100 000 feet of lumber was hauled from Eight Mile Creek into Richlands for the building of the flume system.

Oswald McGuinness served as superintendent on the project until December of 1916 when he severed all ties with the Richlands Land & Irrigation Co. and, with his wife, moved to the East Kootenays.

The ambitious project was not without its failures. A number of times the system had to be shut down and many of the Richlanders were then without water. Also when attempts were made to reopen the pipe line and canal connections the system often failed to produce the necessary water flow.
With World War I and the failure of the fruit crops, primarily due to a lack of water, many of the families that had settled in the Richlands area moved away.

How did the Irrigation System work?
The water from Heckman Creek flowed into a ‘collector’ set up in the creek bed.
When the water reached the 4 ft level in this collector it spilled over into the flume.
The water then moved through a series of flumes (some on trestles and some directly on the ground) and ditches parallel to Heckman Creek before twisting around the mountain and coming out at a level above the Richlands Flats. The trestles were built with the lumber from Eight Mile Creek and each was built at individual heights to match the level of the ground so that the water could continue to move through the system.
The water then fell almost 300 feet to the valley bottom below.
The idea was that the pressure from the fall would push the water through an intricate system of flumes hand dug throughout the valley bottom. Any water left would collect at the top of the next hill, above present-day Cochrane Road
.
Over time the irrigation system fell into disuse and disrepair. Today little remains of the tall trestles that once stood proudly and carried water, or the ditches and flumes that once held water and are now littered with leaves, branches and fallen trees.
However there are still signs of what once was the lifeline of the community including pieces of the lumber that once were the flumes and trestles, though now degraded and very fragile; the hand-dug ditches, (see photo above) are still evident despite the passage of time; and the rock face that was dug out by hand, located near the beginning of the trail.

While the trail is there to be used by all residents, it is hoped that all who use it will respect the history and historical value of the trail on behalf of all residents, past and present.